paranoia agent, 2004, dir. satoshi kon
like many others, i am intrigued by the works of satoshi kon to no end. arguably one of the most interesting minds in anime filmmaking, and unfortunately about the most short-lived. this is his only anime series, somewhat hidden among his groundbreaking and influential films. the series follows a town in trouble at the hands of a mysterious boy with a baseball bat. it feels almost like an anthology series with the amount of parallel characters' storylines shown, though the focus is mainly around the first victim, who gets accused of orchestrating the roller-blade-baseball terror, and her stuffed animal, maromi. the theme song is one of the best around, and for fans of satoshi kon's surreal, reality-bending worlds, this is a black hole. i need to rewatch it.
perfect blue is perfect

serial experiments lain, 1998, dir. shigeru ueda
lain is, in a similar vein to evangelion [despite being so very different], a symbolism-heavy 90s anime with intense characters. this anime follows an introverted fourteen year old girl named lain iwakura, someone who initially has no interest in technology until she receives a cryptic e-mail from her dead classmate. after this, lain starts messing with the internet more until she's forced to seriously question what she perceives to be reality. a surreal, cyberpunk mind trip about death, consciousness, and the prevalence of technology.
l e t ' s a l l l o v e l a i n

yuyushiki, 2013, dir. kaori
yuyushiki is a slice of life anime that focuses on yuzuko, yukari, and yui, three high schoolers in an after school club. despite its cliche plot, this show manages to be entertaining the entire way through. not only is there a good amount of yuri subtext, this show made me laugh out loud during every episode. the cliche characters manage to be charming and interesting. it's comfy and the art style is unique and adorable. the manga is a 4-panel joyride and the op & ed are suitable and i love them. 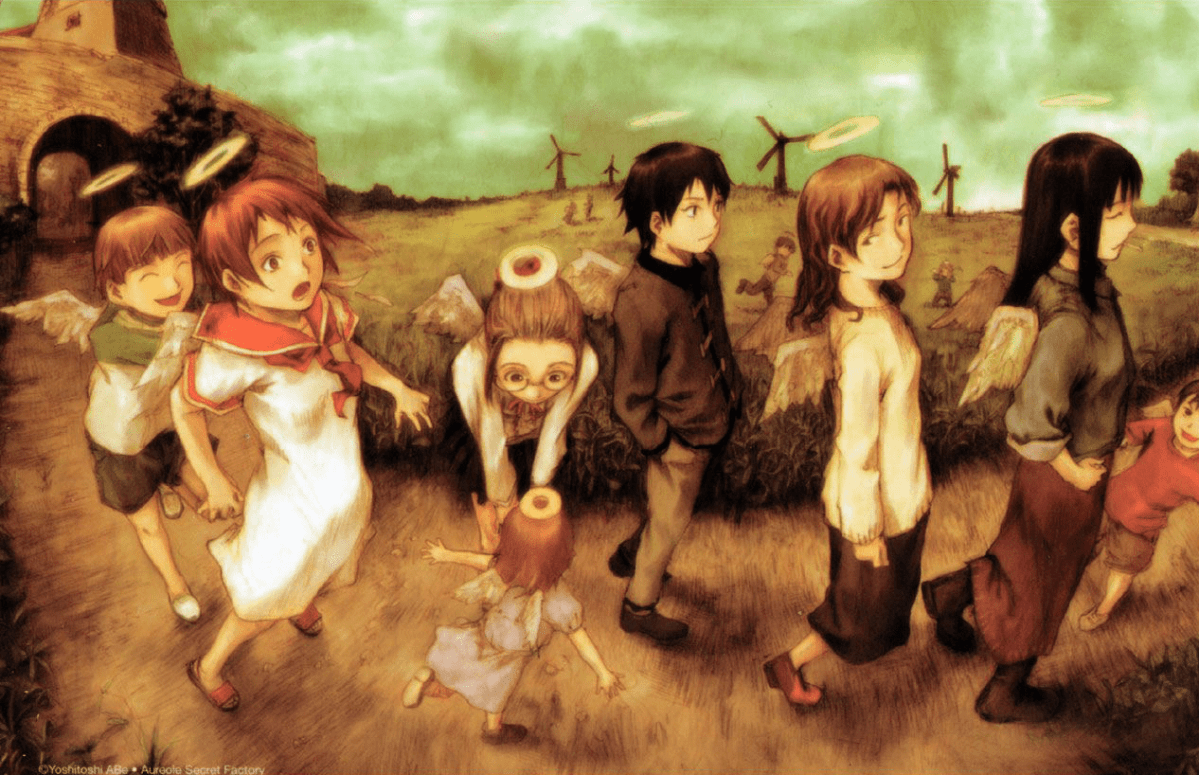 haibane renmei, 2002, dir. tomokazu tokoro
haibane renmei follows a group of angelic creatures known as haibane. they are born out of cocoons, and they live in an idyllic town surrounded by a wall that they cannot climb over. rakka has just been born, having no memory of what was before this. with character designs and a script written by yoshitoshi abe, most well-known for animating serial experiments lain, which i've mentioned here already, the atmosphere and poetic nature of the characters' dialogue presents perfectly themes of death and salvation. reki, a haibane who believes she cannot be saved, is one of my favorite characters of all time. this anime may have just changed everything for me honestly!!

neon genesis evangelion, 1995-1996, dir. hideaki anno
neon genesis evangelion is pretty universally acclaimed. one of a small amount of mecha shows to break through genre obscurity and become a must-watch for everyone regardless of distinctive tastes. evangelion follows a 14 year old, shinji ikari, who's troubled nature by his mother's death and father's absence is resulting in him being shy and withdrawn. these things lead him to have a tendency to run away from things that he doesn't feel comfortable with, a tendency that often clashes with the job sprung onto him of having to pilot a robot to save humankind. evangelion doesn't simply play off the complex emotions that come with shinji's tragic backstory -- they're delved into entirely, as well as those of other characters, such as shinji's emotionally immature, alcoholic guardian who's notorious at being able to put up a front that she consistently has it all together, misato, or his standoffish foreign classmate/housemate who's selfish actions throw her deeper down into the hole she's trying to crawl out of, asuka. don't even get me started on kaworu. massive amounts of symbolism and philosophical messages in this endless abyss of a series!!
the rebuilds are ok but not even close 2 being on the same level. hideaki anno is god. i love asuka. UPDATE: i love rei now as well i have seen the light 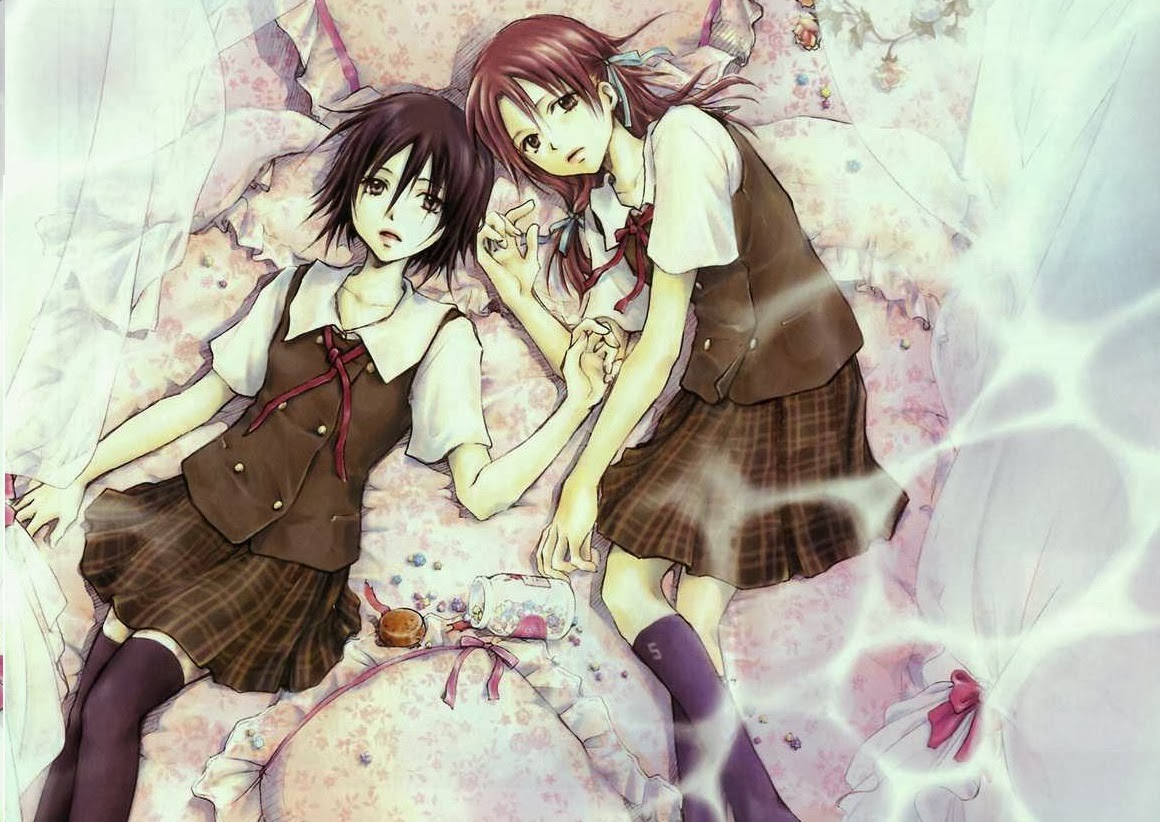 a lollypop or a bullet, 2007-2008, kazuki sakuraba & ikura sugimoto [art]
read this in public, something i would not recommend you do. . . unless you like crying in front of strangers. i thought this was just going to be cute and edgy, but it's heartwarming and heartbreaking [still relatively cute and edgy]. this manga adaptation of a light novel [Sugar Candy Bullets Can't Pierce Anything] follows a stubborn and lonely middle-school girl, nagisa yamada, with a hikikomori elder brother and an affinity for bullets; she wants to join the Self Defense Force to support her family. when a new transfer student arrives [mokuzu umino], rumoured to be daughter of a local rock-star, nagisa is the only one who doesn't seem to care at all. as a result, mokuzu umino begins trying to win her over, proving difficult, as hard-headed nagisa isn't particularly open-minded to mokuzu's insistence that she's a mermaid who needs to make a friend before the storm [occurs] that'll return her to sea. on MAL, 'the gods lie' is in the recommendation column, which i second -- if i remembered more of said manga, it'd be an entry here, but i read it [i think] over three years ago now. both touch on the complexities of coming of age within an unexpectedly volatile environment full of death/destruction, both caused immense pain in my heart. i love mermaids, i love the sea, i don't want to talk more about this manga because it is so short; i read it in one sitting, something i never really do. allured by the tatu-esque emo schoolgirls, this impacted me much more than i'd have expected. i will never stop thinking about it....
i want to read the light novel but at the same time right now i just want to read something that WONT MAKE MRE CRYMY EYES OUT!

dead dead demon's dededededestruction, 2014-, inio asano
i finally caught up to this manga, and boy oh boy is it much more than "cute girls haha aliens"! this follows two high school teens, ouran nakagawa and kadode koyama, in a war-torn tokyo; a war between alien 'invaders' and, presumably, humankind [but moreso the government]. asano's unique art style shines in this; myriad cute mascots, myriad cute girls, myriad goofy guys, including the u.s. president. every character in this is extremely endearing, somehow even moreso than in punpun. i care about everyone and the world in this more than i should, to the point of maybe having sobbed. i actually am tearing up thinking about it. social satire, believable sci-fi, and an enthralling plot make this out to be inio asano's magnum opus -- if he could top this, he would need to be stopped. i can't wait for more chapters, the anticipation is painful!!


oyasumi punpun, 2007-2013, inio asano
inio asano depicts characters in a much more real and tangible way than many other mangaka. despite punpun being depicted as several non-human things throughout the manga, my statement still stands, which makes this an incredible feat. oyasumi punpun follows punpun onodera from elementary school to adulthood. starting out as a cute story about an elementary school student who's in elementary school love with an elementary school girl, the story unfolds in such a way that i feel like i'm going through it as well, which is probably why it had such an emotional toll on me. this manga has so many things that i love, like cults, random made-up omnipresent gods, cute girls, and pain! thanks inio asano.
yes, this manga recommendation area is 2/3 written by inio asano, and what about it. 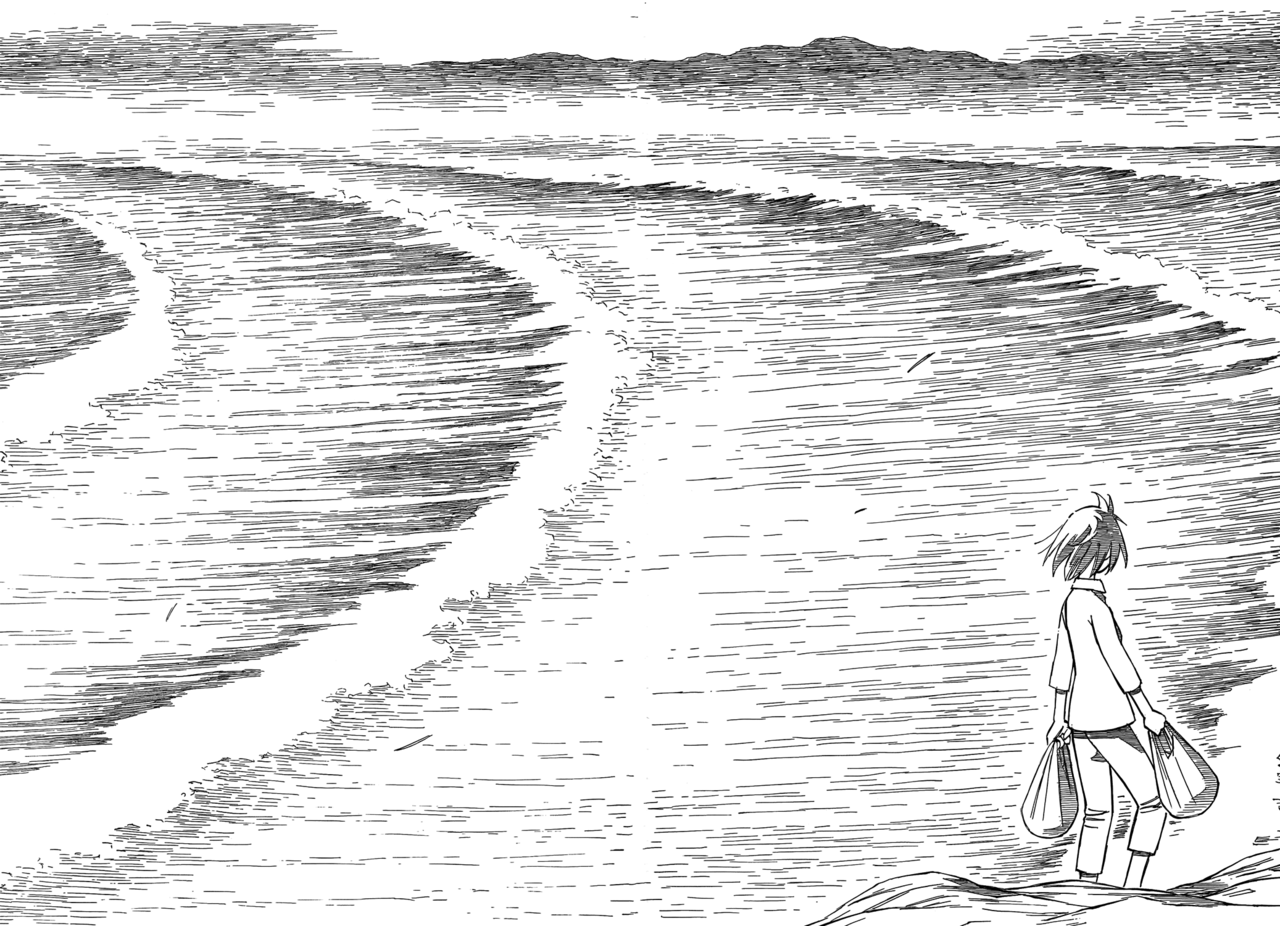 kotonoba drive, 2014-2017, hitoshi ashinano
kotonoba drive centers around a part-time worker living a laid back life, who sometimes gets transported to another world [but for only five minutes]. it's a really cozy slice of life manga. suu-chan's general attitude and how she interacts with the other characters, of which there are very few, make it easy to get wrapped up in this little world. the blend of surreal and slightly paranormal elements with the comfortable countryside life is perfect, and shows how suu-chan got her sense of contentness. hitoshi ashinano created yokohama kaidashi kikou, so he's very qualified in the area of 'comfy things'. though i haven't even read the manga [of ykk]!! gotta get on that bye!!